Finished a couple of 28mm zombie survivors today. Can't remember who makes them. I had already replaced their SciFi weapons with modern ones. Left the teddy bear and frying pan, he he...

I picked up two more boxes of Blue Moon Miniatures 28mm zombies a couple months ago. This box has two part figures, basically split at the waist with a ball and socket type joint.

These are very nice figs, with many variations in pose. Figs have good detail and anatomy, and nice wound effects. Included are 10 female and 10 male torsos. Most of the male torsos are bare chested.The lower pieces are fairly generic - a mix of some kind of fluted skirt, ragged "loin cloth", and some droopy cloth around the legs at ankle height. There is also a marked gap where torsos' "ball" fit into legs' "socket".

All in all, marginal as purely modern zeds - they look more medieval or fantasy to me. So, I got a wild hair and decided to see what I could do with some green stuff, exacto knife, and diagonal cutters.

After deciding which top to go with which bottom, I super glued the pieces and then got out the clippers and knife.Since my sculpting skills are fairly elementary, I decided to go with a ragged effect, as if this batch of zombies was pretty worked over, or had been lumbering around for quite a while.

I added ragged sleeves, torn shirts, pants, and shorts where it made sense based on pose and existing clothing/rags. I really don't like the fluted skirt effect these figs have, so tried to minimize that by chopping out the fabric under the buttocks and between the legs. (Most modern (western) males wear pants, right? I also tried to minimize the visual effect of the torso joint, so added GS to mask that, and make the upper clothing meld into the lower, or drape over to hide the joint.

I did several where the sleeves or pants legs have been torn loose, and have settled at wrist or ankle. Happy with how that came out. Also did some hanging/tattered pieces off arms, or connected from arms to torso. The two pics above and below show the results after greennstuff applied.

So next thing of course is to get them painted!

I used some new schemas this time - added some blue, green and purple washes to my usual reds/browns. My intent is to show zombies that are in later stages of decomposition. Happy with the effort so far. I may decide to go back and dirty up the clothing a little more.

I have one box of Blue Moon Zombies left to work on. This is the box set that has medieval/fantasy looking armed zombies. I'll have to do some serious hacking to get these guys into the 20th / 21st Century. Stay tuned...
Posted by pacarat at 6:14 PM No comments:

Ok, have about 60 or so zeds in the works. Ordered the big zombie horde from Studio Miniatures last winter. Finally worked my way through the lead pile to get to these guys. Really happy with how they are turning out.

Flea Market Find of the Year

Was out cruising an indoor flea market in Georgia while on travel a few weeks ago. Found this little gem in mint condition for $22.00. It is a replica of one the earliest 1950's McDonalds. Perfect size for 28mm zombie gaming. Also pictured are a few 1/43 scale vehicles I picked up at an outdoor flea market the day prior, and some WIP 28mm zeds looking for the "dollar menu". 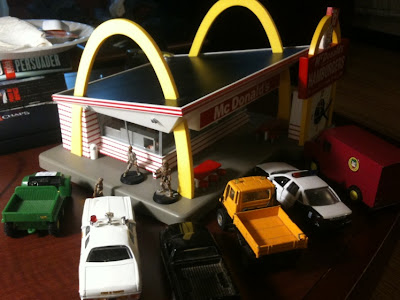 Made by Danbury Mint. A/c powered analog clock on sign in front of building. Fully detailed/painted interior, with two skylights in ceiling so small light bulbs mounted above can shine through. Trying to decide what to do about the clock face - not sure if I want to keep it or replace it with some signage or hide with some bushes. 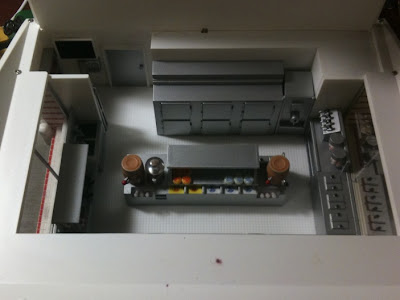 Roof comes off as separate piece, and the interior ceiling is hinged for access, as shown above. There is room for standard 1" bases to fit around the center island, so I'll be able to have figures inside while gaming. Way cool! 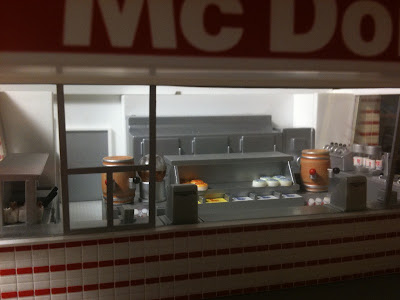 View of the lighted interior. Super Size me!
Posted by pacarat at 9:38 AM 2 comments: